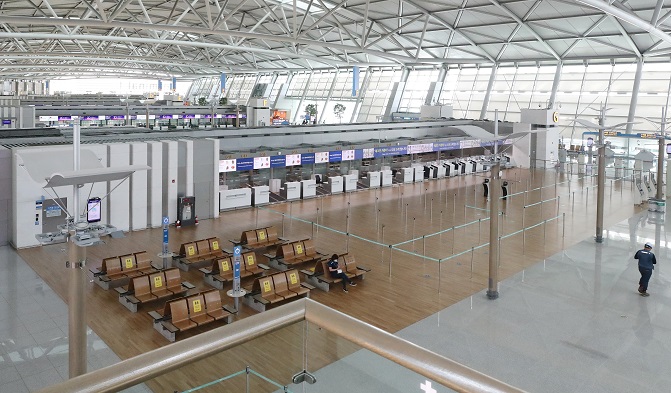 SEOUL, July 30 (Korea Bizwire) – For Kwon Ji-young, a 41-year-old office worker, traveling abroad is an annual ritual that allows her to take a complete break from the heavy workload of her daily life.

But since canceling her planned 10-day trip to Austria in April of last year due to the COVID-19 pandemic, she has only looked at photos taken on previous trips in an attempt to stay safe. recall good memories.

“I don’t know when I will be able to travel abroad without virus issues,” Kwon said. “If I am fully vaccinated I may be able to do it, but I am careful before going abroad anytime soon. “

The tourism industry is one of the sectors hardest hit by the pandemic, as demand for overseas travel, the main source of revenue for travel agencies here, dried up amid the suspension of flights and border restrictions.

The pandemic has dealt a devastating blow to travel agencies in South Korea, which had already seen slow sales growth in recent years amid diplomatic feuds with China and Japan.

Suffering from business interruption and job cuts caused by the pandemic, travel agencies claimed they were on the verge of “withering to death.”

“Travel agencies are in the doldrums. Their offices remained open, but their business activities effectively ceased, ”said Baeg Seung-pil, vice president of the Korea Association of Travel Agents (KATA).

At the end of April, the number of travel agencies stood at 13,433 across the country, down 4.6% from the previous year, according to data from the state tax agency.

A report from KATA showed that 25.9% of the 17,660 registered travel agencies had suspended operations or had gone bankrupt by the end of October last year.

In 2020, the country’s tourism sector is estimated to have suffered losses of 14.1 trillion won ($ 12.3 billion), according to government data. Among them, the travel industry suffered about 6.4 trillion won in damages.

Kang Soon-young, who runs a small travel agency in east Seoul, said she turned half of her office into a laundromat last year in a desperate attempt to avoid her business shutting down .

“Until things improve a bit, I may have to endure the current situation while doing these two jobs together,” she said. 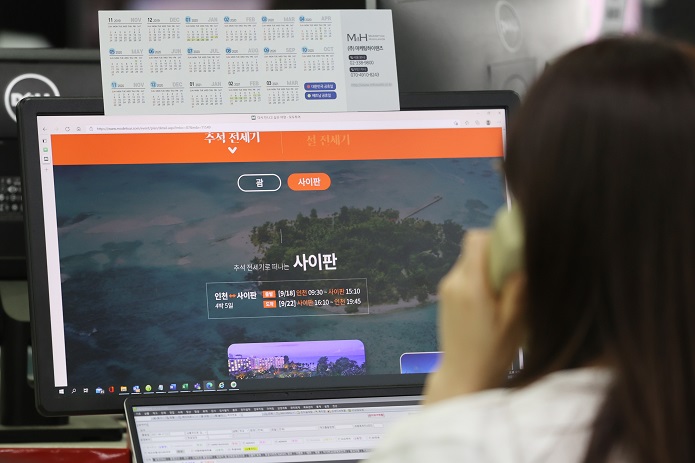 This file photo, taken on June 21, 2021, shows an official at travel agency No.2 Mode Tour talking on the phone in front of a computer screen showing an overseas tour schedule for the holidays of Chuseok’s fall harvest. (Yonhap)

Amid protracted recessions, a silver lining for the resumption of overseas travel has developed since June as the country ramped up the rollout of the COVID-19 vaccine.

At least 18.3 million people have received their first injection, or 35.8% of its 52 million population, since the country began its vaccination campaign on February 26.

The country is seeking to deliver the first dose to 36 million people, or 70 percent of its population, by September with the goal of achieving herd immunity by November.

Some countries, such as France and the Netherlands, have already exempted Korean travelers from quarantine upon arrival if they submit negative COVID-19 test results or are fully vaccinated.

The Czech Republic has not imposed any entry restrictions on Koreans.

Adding to this optimism, the government announced a plan to push for a quarantine-free “travel bubble” deal with Saipan, Guam and Singapore to allow group travel abroad for individuals. fully vaccinated.

This decision will exempt them from compulsory quarantine upon entering the territory of the other.

The government signed a travel bubble deal with the US Pacific island of Saipan in late June, becoming the first such case under South Korea’s travel bubble initiative.

South Korean Airlines resumption of flights for Saipan on Saturday, with six Koreans traveling for the first time as part of the travel bubble program.

“When COVID-19 restrictions are relaxed, such as a mandatory quarantine, the travel industry is an industry where explosive demand can be anticipated,” said Ji In-hae, analyst at Hanwha Investment & Securities Co.

But a recent surge in virus cases and the rapid spread of the more contagious delta variant has once again put travel companies on edge. 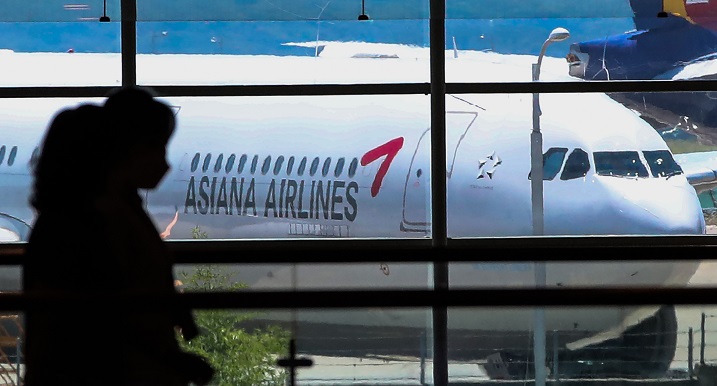 Inquiries about overseas travel in the summer have remained low-key after the government began to impose the the toughest virus brakes ever in the greater Seoul area on July 12, according to travel agencies.

He said bookings for group vacation tour programs are 30% booked without cancellation.

“Travel demand is likely to recover gradually if the country achieves collective immunity. But it may take two or three years for the sector to return to pre-pandemic levels, ”he said.

To prepare for rebounds in post-pandemic travel, some travel agencies have developed online travel service platforms to better cater to individual travelers who prefer do-it-yourself travel.

Large Korean travel agencies have focused on running programs based on group travel, increasingly losing competition to attract young customers to travel platform operators, such as Expedia and Booking.com.

Interpark Tour also launched a pilot version of the AI-based platform in June. If people choose where and when to travel, AI recommends flights, accommodation, and route details.

Baeg of KATA said he was not pessimistic about resuming overseas travel as the country ramped up vaccine rollout.

“But unless the COVID-19 pandemic is brought under control, like the flu, it’s hard to expect a boom in overseas travel like those seen in the past.”

Chennai: According to some European travel agencies, it doesn’t matter. “Biblical cities, ancient cultures and mouth-watering delicacies,” boasts Berlin-based Soviet Tours, a company known for its trips to the former Soviet bloc that offers trips to Syria in 2022. “After years ravaged by civil war, Syria is slowly starting to return to a level of […]

Winding Tree, a decentralized B2B marketplace for hotels, airlines, travel agencies and more The hospitality and travel industries, although two of the most dynamic in the world, have been negatively affected by the economic restrictions induced by COVID-19, which are now gradually fading. Despite the impact of the pandemic on consumer behavior and all aspects […]

London, Ont. – After months of confinement and hesitation, a few Londoners are thinking about the trip again. A clear sign of the change is visible in some local travel agencies where agents have returned to their jobs. Kelly Balderston, travel agent at Robert Q Travel in London, is back full time and was recently […]